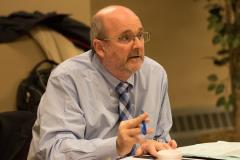 Mike graduated from the University of Kentucky in 1985.  He then attended law school at The Ohio State University and graduated in 1988. After working for a law firm in Cleveland, Ohio, Mike moved to Chicago to pursue his Ph.D from Loyola.

Mike has been an adjunct faculty member at Loyola since 1994, primarily teaching constitutional law and judicial process courses. In addition, he has remained a practicing attorney, and he now serves at the Director of Compliance at Snap-on Credit in Libertyville, Illinois.

Mike helped to start the Mock Trial program at Loyola in 2002, and he has been the head coach ever since.  Mike joined the AMTA Board of Directors in 2012.