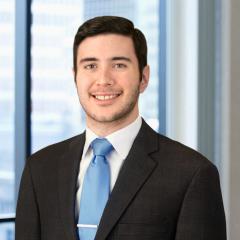 Michael is a civil litigation attorney with Adler Pollock & Sheehan P.C. in Providence, Rhode Island. Michael is a graduate of Duke University and Duke Law School. As an undergraduate, Michael was a four-year mock trial competitor, winning the AMTA National Championship in 2012. While in law school, Michael served as the President of the Mock Trial Board, Interscholastic Coordinator for the Moot Court Board, and Articles Editor for the Duke Journal of Gender Law and Policy. Michael also externed for the United States Attorney’s Office for the Eastern District of North Carolina, and volunteered as a co-chair of Duke Law’s Southern Justice Spring Break program.

Michael became a full member of the AMTA Board of Directors in 2020, and has been involved with AMTA since 2008. Michael currently serves as the head coach of Brown University's mock trial program, and previously served as Duke University's head mock trial coach.