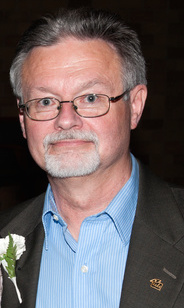 Professor Hatting was inducted into the Hall of Fame in 2015, at the National Championship Tournament in Cincinnati, Ohio.  Steve Hatting began coaching the University of St. Thomas mock trial teams in 1986, and they quickly became a national powerhouse, winning the national title in 1987, and finishing as the runner-up in 1989. By the time he was finished coaching the small, St. Paul, Minnesota school, after 19 years, his teams earned ​nine prestigious “top 10” finishes.

Steve’s St. Thomas teams set the standard for witness characterization, and costuming that still exists to this day. He was truly a pioneer of collegiate mock trial.